admin
0
0
0
Is there a ride-hailing service in Gabon? Yes, Gozem just launched there this week. Founded in 2018 by Emeka Ajene and Raphael Dana, Gozem operates an app that offers transportation, logistics, e-commerce and financial services in primarily-francophone African countries.  Gozem is aiming to be the super app for Africa and is modelled after the success…
Total
0
Shares
0
0
0

Is there a ride-hailing service in Gabon? Yes, Gozem just launched there this week.

Gozem is aiming to be the super app for Africa and is modelled after the success of Gojek and WeChat in Southeast Asia and China respectively. While it is only one of many super app candidates in Africa, geographic expansion is a signal of strong intent.

Until the rollout in Gabon, Gozem was only available in cities across Togo and Benin, offering motorcycle taxis, tricycle taxis, and delivery of groceries, gas bottles, and meals.

The company says it has more than 500,000 registered users who have completed more than 2.5 million trips since inception.

Gabon will be Gozem’s first operation outside of West Africa. The Central African country’s population is under 2.5 million with almost 75% under the age of 30.

The ride-hailing feature is the only service Gabonese users will find on the app at the moment and it is only available in Libreville, the capital city.

“Our immediate focus is on providing a high-quality, reliable taxi service in that city, and then expanding the range of services we offer to Libreville’s population,” Ajene, Gozem co-founder and CEO, said to TechCabal.

Launching a taxi service in Gabon helps the company “diversify away from our beginnings as a 100% motorcycle-taxi oriented platform.”

With Libreville in the mix, Gozem now operates in 10 cities across West and Central Africa. Ajene notes that most are not capital cities.

“We’ve developed an in-house capability to operate effectively in secondary cities in the region and there are one or two additional cities that you might ultimately see Gozem operating in in Gabon,” he said.

One point of curiosity in this expansion is that Gabon is a smaller country by population compared to Togo (~8 million) and Benin (~ 12 million). Ajene acknowledges that but explains that purchasing power is another consideration that bears on expansion plans.

Gozem’s ride-hailing offering will work in Gabon like a standard app-enabled taxi booking service. Users download, sign up and input their destination to request rides. Driver accepts and the fare is calculated by distance. Users can pay in cash, with Airtel Money or Moov Money, or by credit card.

Raphael Dana, Gozem co-founder, says the launch responds to the needs of the Gabonese population and aligns with Gozem’s long-term plan to organise transport and commerce in Africa around the ongoing smartphone and internet revolution.

“Our ambition is to consolidate our status as the premier super app in Africa, and this expansion to Central Africa, our first foray outside of West Africa, also allows us to prepare our upcoming expansion to Cameroon,” Dana said.

The expansion to Cameroon is on the calendar for this year; DR Congo is also being explored. Beyond moving into new countries to enable taxis however, Gozem plans to make its other verticals compete with incumbents in the markets they currently operate.

“We have robust food & e-commerce delivery verticals, we’re beginning to see a significant impact coming from our vehicle financing vertical as well, and our plans for our full-service wallet are still on track,” Ajene said. 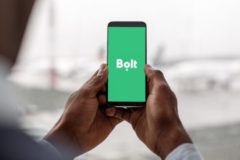 Some Nigerian users of Bolt, the private taxi ride-hailing service, have been raising some alarm.  From Monday evening through Tuesday morning, suggestions that Bolt drivers were aiding the Nigeria Police in capturing protesters surfaced on Twitter, becoming a top trend.  The anxiety has been amplified by the ongoing protests against SARS – the Special Anti-Robbery […]

The Apple logo is seen on a window of the company’s store in Bangkok on February 14, 2021. Photo: Mladen Antonov/AFP (Getty Images)Apple is in spring cleaning mode when it comes to its product inventory. In recent weeks, not only has it said, “mmm, bye,” to the iMac Pro and the original HomePod, but now…

2 SEPTEMBER, 2021 Good morning ☀️ ️ This year has the highest number of African start-ups participating in Y Combinator’s Accelerator programme: fifteen.  Last month, I wrote about the thirteen startups from Nigeria, Ghana, Zambia, Egypt, South Africa and Morocco, who were part of the summer batch of 2021.  Two startups, Kenya’s Fingo and Egypt’s…

Nigerian fintech startup, Kuda Bank, has raised $55 million in a Series B round at a valuation of $500 million. This comes after a recent Series A of $25 million announced by the company just a little over four months ago. The latest round was co-led by existing investors Target Global and Valar Ventures, the…